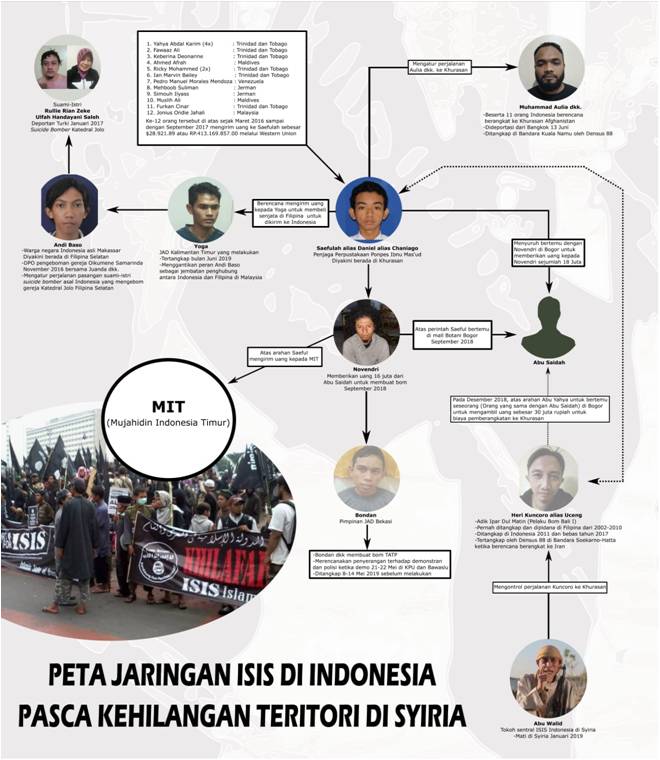 A map shown by Indonesian police at a July 2019 press conference shows a man from Padang, West Sumatra at the centre of an international pro-ISIS network. He was operating from a base in Afghanistan..
Learning From Extremists in West Sumatra

(Jakarta, 28 February 2020) Understanding how neighbourhood study groups in Indonesia turned into pro-ISIS cells with links to Afghanistan may offer clues to effective strategies to counter extremism.

In its latest report, “Learning From Extremists in West Sumatra”, the Institute for Policy Analysis of Conflict (IPAC) examines how two groups in the cities of Padang and Bukittinggi expanded their networks over a decade through trading and migration networks, direct exposure to radical clerics, and the process of fleeing to new areas to evade the police.

“The West Sumatra study calls into question the wisdom of the Indonesian government’s approach of treating radicalism as a problem of insufficient nationalism, curable by indoctrination in the state ideology, Pancasila,” says Sidney Jones, IPAC director. “The problems here were more concrete: a mosque that hosted extremist discussions for more than a decade without any attention from local authorities and deportees from Turkey who returned home without sufficient monitoring.”

The report traces how the two groups evolved differently from similar origins. Both started as branches of a pro-shari’ah advocacy group, the Indonesian Mujahidin Council (Majelis Mujahidin Indonesia, MMI). Both had members who moved to Jakarta to do business in Southeast Asia’s largest cloth market in Tanah Abang, Jakarta, where they came in touch with the leading extremist clerics of the day and invited them back to Sumatra.

Individual leaders, however, steered the groups in different directions, and disputes were frequent, resulting in splinters. The Padang group wanted to conduct attacks, the Bukittnggi group was less interested in violence at home. One man in Bukittinggi had contacts in al-Qaeda, so even though members wanted to join ISIS, they found themselves in Idlib, Syria with the al-Nusra Front. A Padang man in 2017 became an ISIS liaison in Khorasan, the ISIS “province” in Afghanistan, encouraging other Indonesians to join him.

Deportees play a major role in this story. A safehouse in Turkey for Indonesians waiting to cross into Syria became an important node linking the West Sumatrans in to a broader circle of fellow extremists.

“An effective rehabilitation, reintegration and monitoring program for deportees, now numbering well over 550, is still lacking in Indonesia,” says Jones. “Knowing how deportees have fared even several years after their return could help in the development of programs for future returnees.”